I left you in front of the door, one month ago - now, let's visit those beautiful palaces built by the Nasrid dynasty during the 14th century, true heart and jewel of the Alhambra.

Obviously, other palaces were built here before, but they are now destroyed. The oldest remaining one is the Mexuar (early 14th century), in which the visitor enters the place. Built for buisness and administration, it is the most modest of the Nasrid palaces and it's original architecture was quite transformed by christian rebuildings. 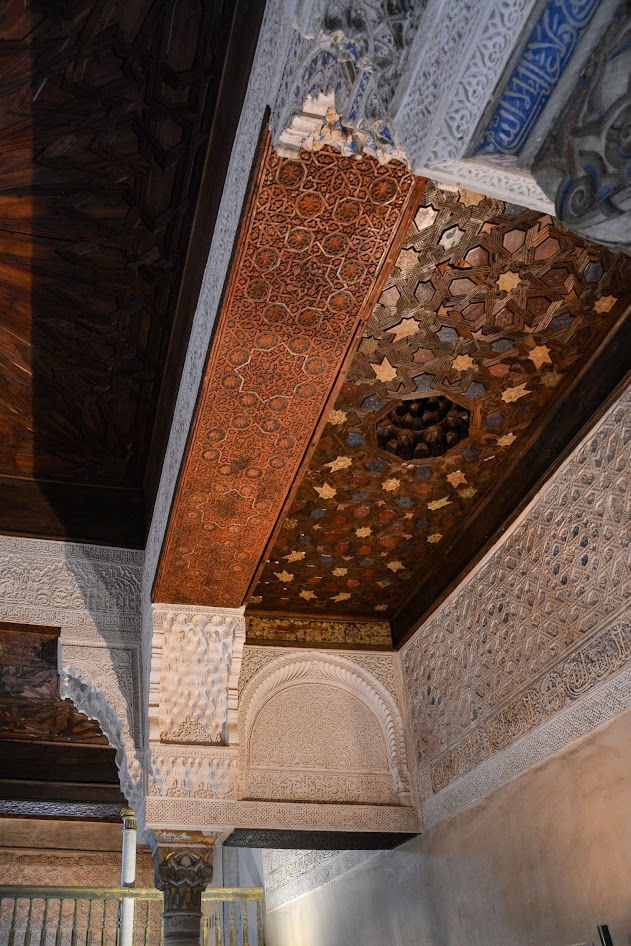 This is the first of a serie of posts about the amazing Alhambra, in Granada.
Under this word, Alhambra, what do you find ? A large fortified hill, with many things inside : lovely gardens, a ruined militar area, a luxury hotel, a church, moorish baths, a few private houses, a quite arrogant Renaissance palace built by Charles V and the most elegant, delicious Moorish palaces you can find in all Europe.
If you want to visit the place, you'd better book your tickets one or two months ahead and wake up early to enjoy the first quiet hours of the morning before the tourists arrive. That's what we did, and as I was reading again the Tales of the Alhambra, I realized that our first approach of the place was almost exactly the same as Washington Irving's, in 1829. So, as his english is much better than mine, I'll let him tell you wht we both found here...

Crossing an open space in front of the palace of the captain-general, we ascended a confined and winding street, the name of which reminded us of the chivalric days of Granada. It is called the Calle, or street of the Gomeres, from a Moorish family famous in chronicle and songs. This street led us to the Puerta de las Granadas, a massive gateway of Grecian architecture, built by Charles V, forming the entrance of the domains of the Alhambra. [...] 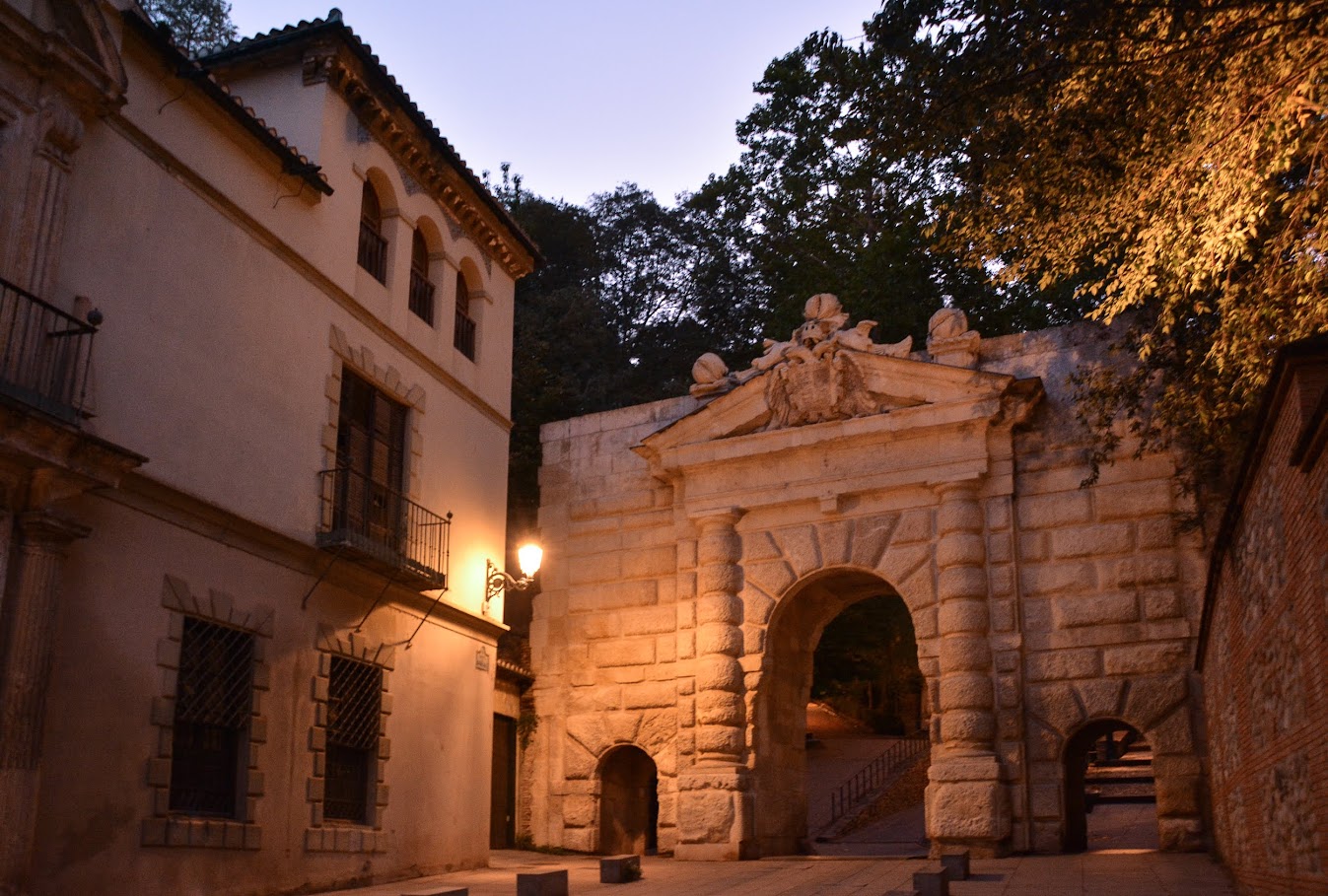 (Quotations of Washington Irving Tales of the Alhambra come from this online edition, published by university of Adelaide.)

About 200 km east from Malaga, on the same southern coast of Spain, Almería also has its big Moorish fortress, a bit older and even larger.
The construction of the defensive citadel began in 955 during the reign of Abd-al-Rahman III, caliph of Cordoba, and many additions were made to this first building by Arabs and catholic kings, between the 10th and 15th centuries.

Since the beginning of the 1950's, a lot of movies were shooted in Almería and around, some of them picturing the Alcazaba : Mankiewicz's Cleopatra, Conan the Barbarian, Indiana Jones and the Last Crusade, Never Say Never Again, Risen, season 6 of Game of Thrones... 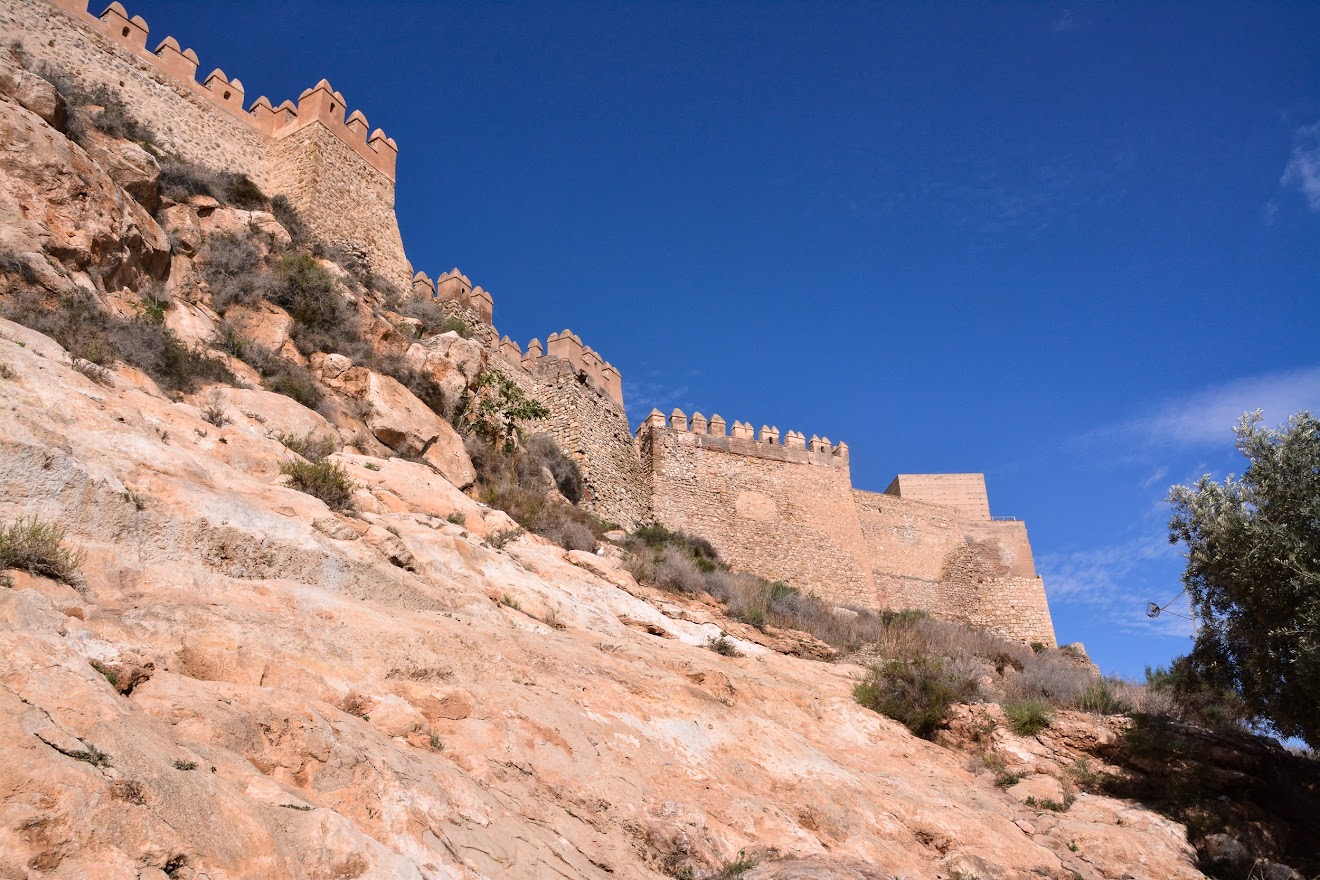 Alcazaba (from the arabic al-qasbah, citadel) is the name given to Moorish fortifications in Spain. In southern Spain especially, a lot of cities have their Alcazaba, sometimes a mere tower on a hill, sometimes a much more sophisticated building with a real palace hidden inside the ramparts. The Alcazaba of Malaga is one of those, and probably the best preserved - built in early 11th century by the Hammudid dinasty.

First, we discover it from the beautiful park of Malaga & gardens of Pedro Luis Alonso, south-east of the city... 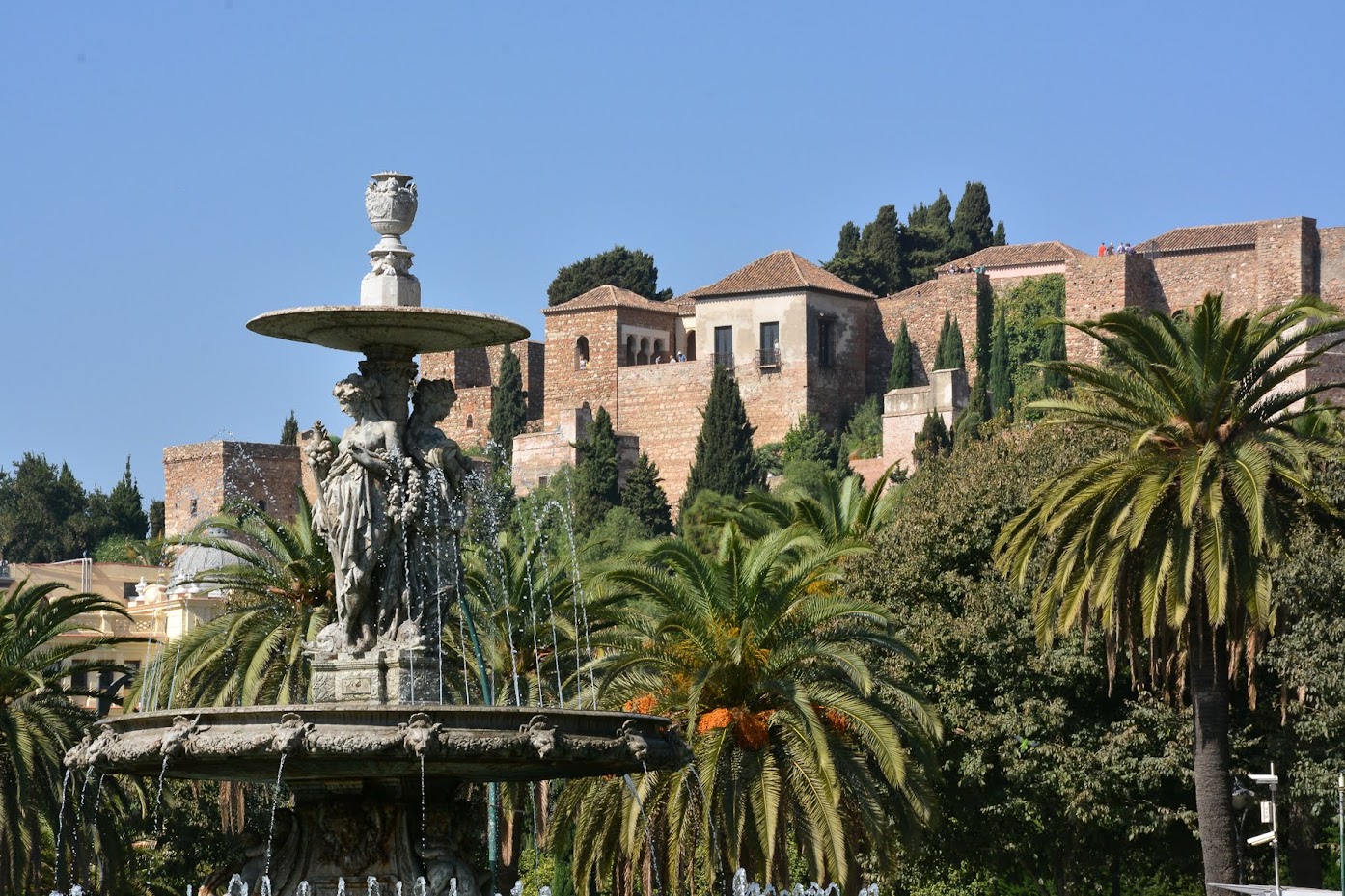 Built between 1299 and 1314, the Palazzo Vecchio is certainly the most remarkable building of Florence. It was given quite many names durind in long existence : Palazzo dei Priori, palazzo della Signoria (la Signoria was the ruling body of the city in medieval and Renaissance times), Palazzo del Popolo, Palazzo Ducale (when Cosimo de Medicis became duke and moved from Palazzo Medici in 1540) and eventually Palazzo Vecchio ("Old Palace") when the duke left for the more modern Palazzo Pitti.
In the late 1860's, when Florence became capital of the kingdom of Italy the palace became the seat of the new provisional government. Since 1871, it houses the office of the mayor of Florence and the City Council : although most of the place is now a museum, it remains a deep symbol and true place of local government. 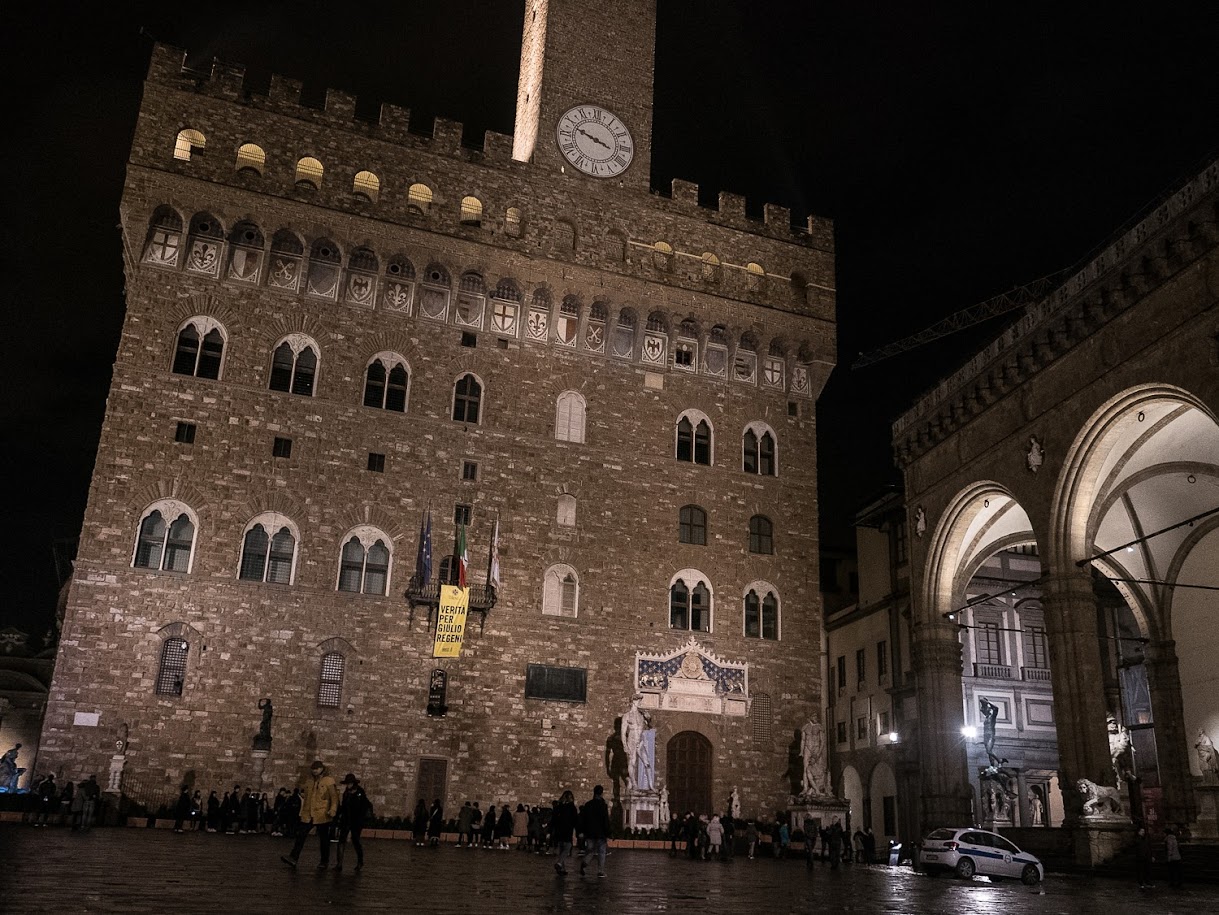 Built in 1255 for the Capitano del popolo (municipal officeholder), the Bargello appears to be the older public building in Florence. Its austere crenelated walls and tower served as model for the more famous Palazzo Vecchio at the end of 13th century.
In 1261, the Podesta, the highest magistrate of Florence city council, settles down in the new castle. In 1574, the Podesta is abolished by the Medici and the police chief of Florence, the bargello, replace him in the building. Used as a prison, the Palazzo del Bargello remained the headquarters of the florentine police until 1859, and then opened as a national museum in 1865.
You visit it more for the amazing collection of sculptures it houses than for the palace itself - but the place deserves to appear in this collection of castles :-) 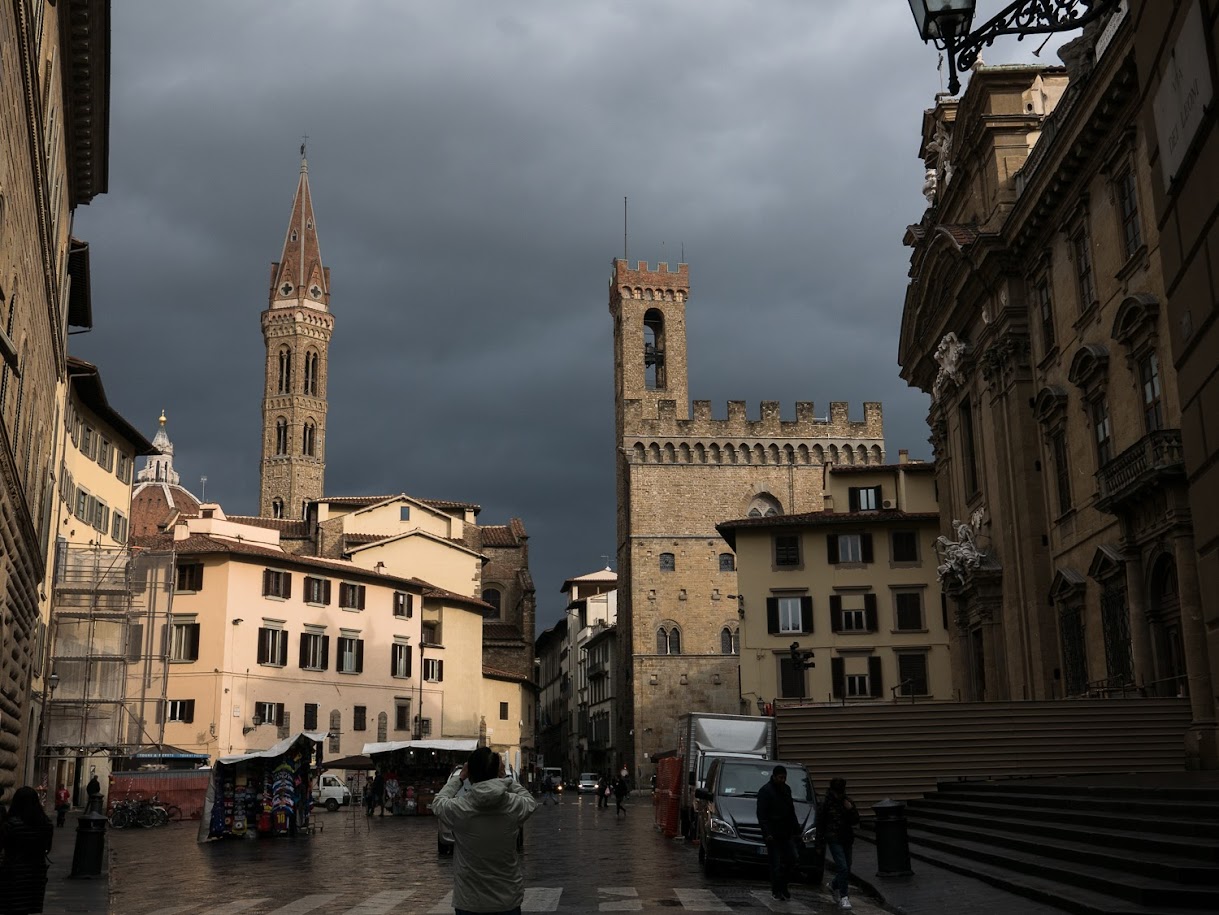 Designed by Michelozzo for Cosimo the Elder, founder of the Medici dinasty, and built between 1444 and 1484, the palazzo stayed in the family for only one century. In 1540, Cosimo I, first Grand Duke of Tuscany, leaves the place for the more significant Palazzio Vecchio (siege of the political power since the early 14th century) and then the palazzo Pitti, more modern and comfortable.
At that time, the palazzo Medici is sold to another powerful family of Florence, the Riccardi, that keep on making the place more attractive.

Entry by the cortile, via Camillo Cavour... 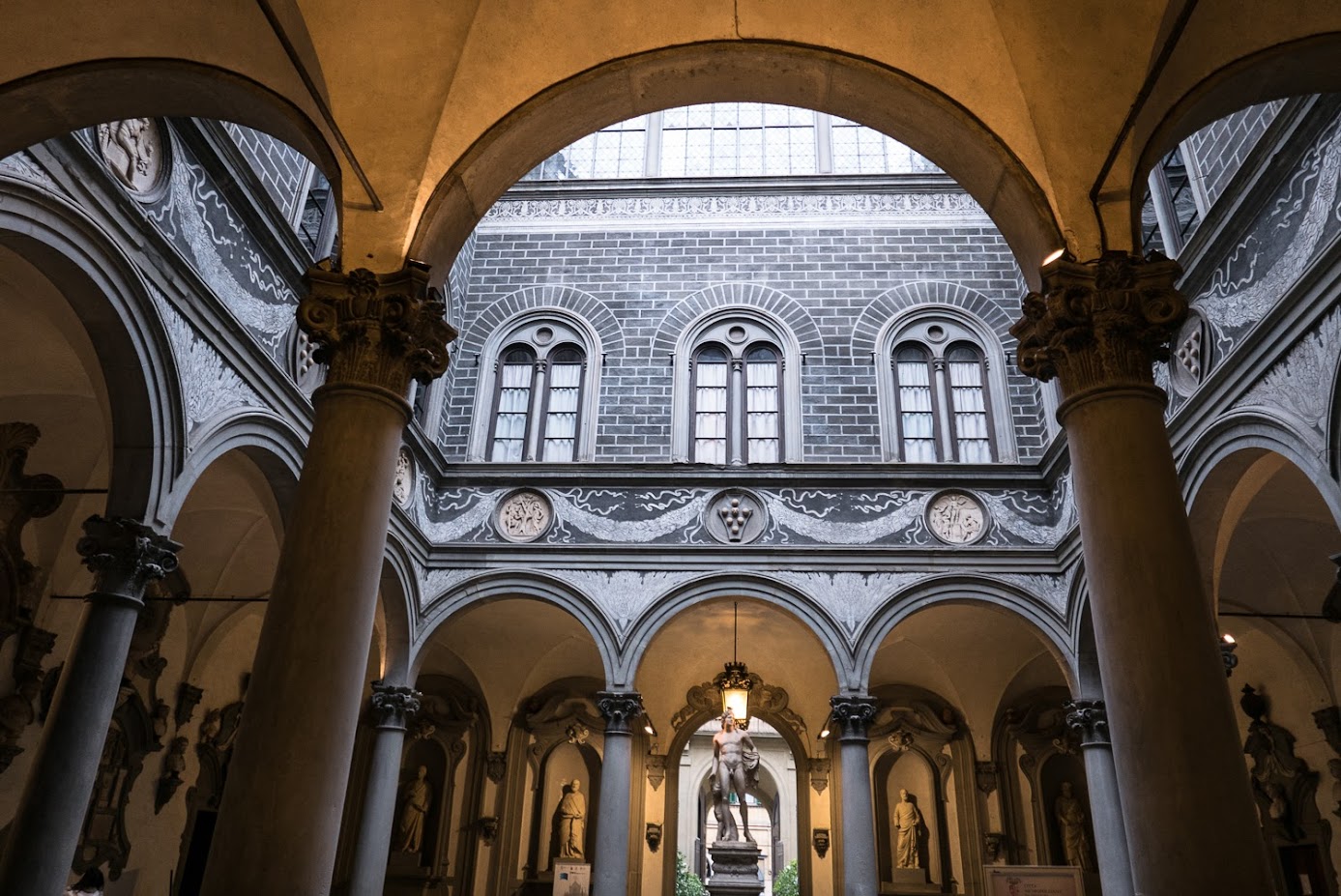 Built between 1749 et 1758 by Jacques François de Chambray, knight of the Order of Malta and Governor of Gozo, Fort Chambray became an hospital during the 19th century and a leprosarium between 1937 and 1956 - and is now converted into a luxury residential complex. You can easily find an apartement to rent for your holidays, here - but the most beautiful, maybe, is outside the walls, in this out of time landscape. 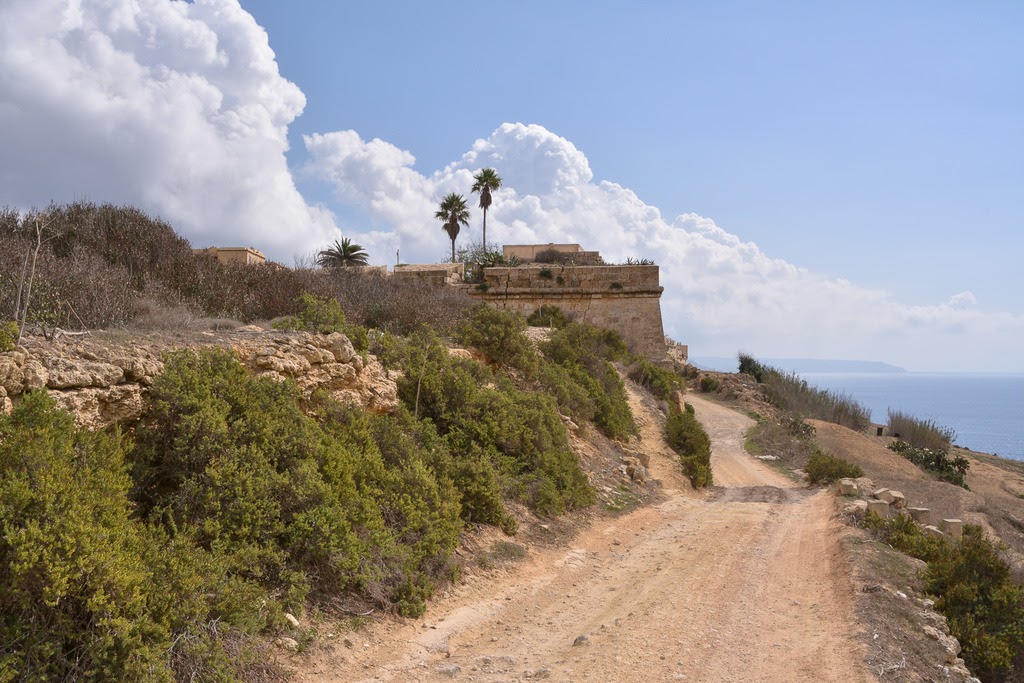 Castle "De Keukenhof". This is a castle that has stayed within the same family for centuries by means of inheritance. Its origins are strictly connected to the success of the Golden Age ‘United East Indian Company’ (V.O.C.): the man who built it in 1642 was Adriaen Maertenszoon Block, a former Commander of V.O.C on the Moluccan islands. In that age the Moluccans were especially important because of their precious cloves and the VOC was fighting a grim battle to enforce the monopoly over this spice.

He bought the land of "Keukenduin" (literally ‘kitchen dune’) with the purpose to have his house built there. He then slowly expanded the property and even became the biggest landowner in the area. The castle did not have towers yet, but still the splendid halls on the first floor must have impressed many visitors.
In the following centuries the estate kept growing until 1809 (thanks to squire Steengracht).

The salons are full of furniture dating of many years and styles. For instance, in the book cabinet, a very beautiful and complete Encyclopaedia from 1770 is on display (the Foundation that owns the estate now has employed a team of professionals and volunteers to take care of the many and varied restorations).

The story of the castle’s inhabitants is told by the large collection of painted portraits on the walls. The beautiful interior - still in its original setting - shows how the lords of castle "De Keukenhof" lived. Even the kitchen is still intact and it is still used during festivities and dinner parties at the castle.